“These new journeypersons should be very proud of themselves. I know it wasn’t easy, but their efforts to graduate from their apprenticeship will pay off for them personally and for their families.” says Jon P. Preciado Business Manager of the Southern California District Council of Laborers (SCDCL). “Such resolve on their part shows the commitment that our members and this union have for the construction industry. I congratulate them on behalf of the 25,000 LIUNA members in Southern California.” 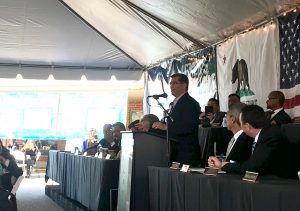 California Attorney General Xavier Becerra addresses graduates with a positive message, “There is nothing more important than having dignity and pride in what you do.”

These programs are approved by the California Division of Apprenticeship Standards and recognized by the Department of Labor. Each apprenticeship program requires the individual to complete 4,000 to 4,200 on-the-job training hours and 288 to 432 hours of related and supplemental instruction. Before the individual can begin on such dedicated work, applicants are screened, and then selected by means of a strength endurance test, an interview, and a drug test. 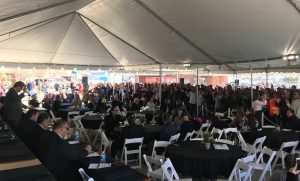 “Participating in this graduation ceremony is an honor for me,” said Rocco Davis, LIUNA Vice President and Pacific Southwest Regional Manager. “These individuals are the future of our organization and their dedication to their apprenticeship assures me that LIUNA members will continue to build Southern California for many years to come.”